Home » Blog » Knowing the Unknown – Insights on the Ostrich Syndrome 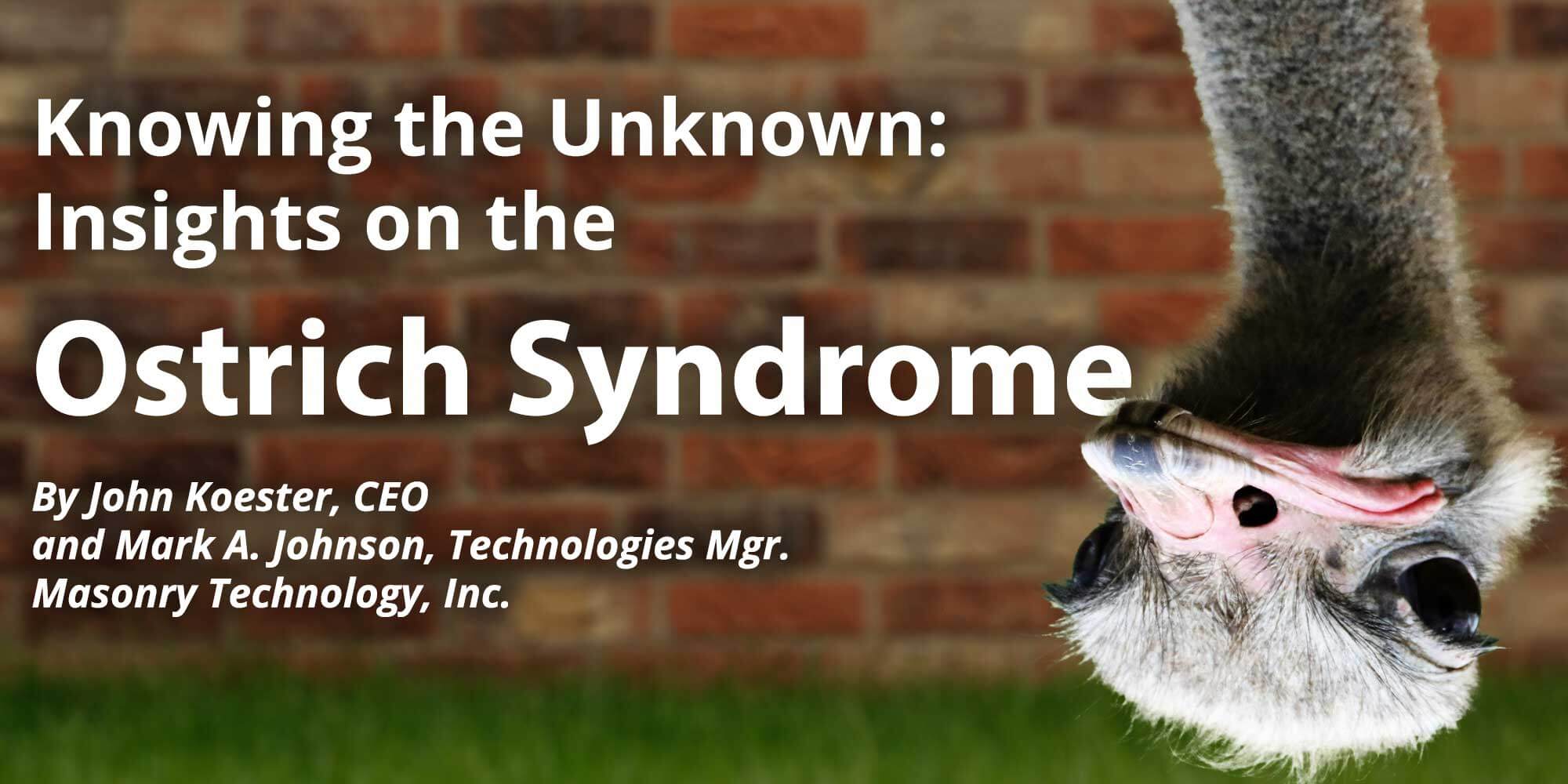 In the construction industry, many premature failures are a result of shortcuts taken to circumvent good standard practices. The reasons or excuses for taking these shortcuts are that they save time, they save material and that means they save money! The term “value engineering” sounds professional, but in many cases it is short-term gain with long-term negative consequences. If it is truly the same quality and quantity for less money, that is value gained. If it is just less quantity and quality for less money, there is no value gained, there is actually value lost! When construction professionals and others involved with a building project make a decision to take shortcuts on materials, quality and labor, the construction details involved don’t last as long and often end in catastrophic failure. The phrase “Who could have known that would happen?” doesn’t alleviate the situation!

When it comes to value engineering moisture management components, details and systems, you had better know what you are doing. Sometimes there are very good reasons for choosing a less expensive system; sometimes the owner’s budget just can’t afford the better, more expensive system. If the system is of the type that can be upgraded in the future when funds are available to do so, or if its service life can be extended with a good maintenance plan that allows for a “pay-as-you-go” solution, then choosing the less expensive system makes sense/cents. However, if it is the type of moisture management system that is incorporated into the exterior building envelope and not accessible at a later date for an upgrade or for maintenance, then the decision making process needs to be different.

The irony is that it is just this type of moisture management system that gets downgraded during some of the value engineering efforts. Not being accessible can mean it is buried (covered up) in a wall or roof system, or it can mean it is just hard to get to or just out-of-sight like in a high roof system. In any case these are not the parts of an exterior building envelope to cheapen up or cut corners. When moisture management systems fail prematurely, there are very few building materials in close proximity to this type of failure that will do well. Water is the universal solvent; given time all things succumb to water. And while it is happening, they look bad and in some cases, smell bad. They can also be hazardous to health and safety.

When Will Moisture Failures Show? 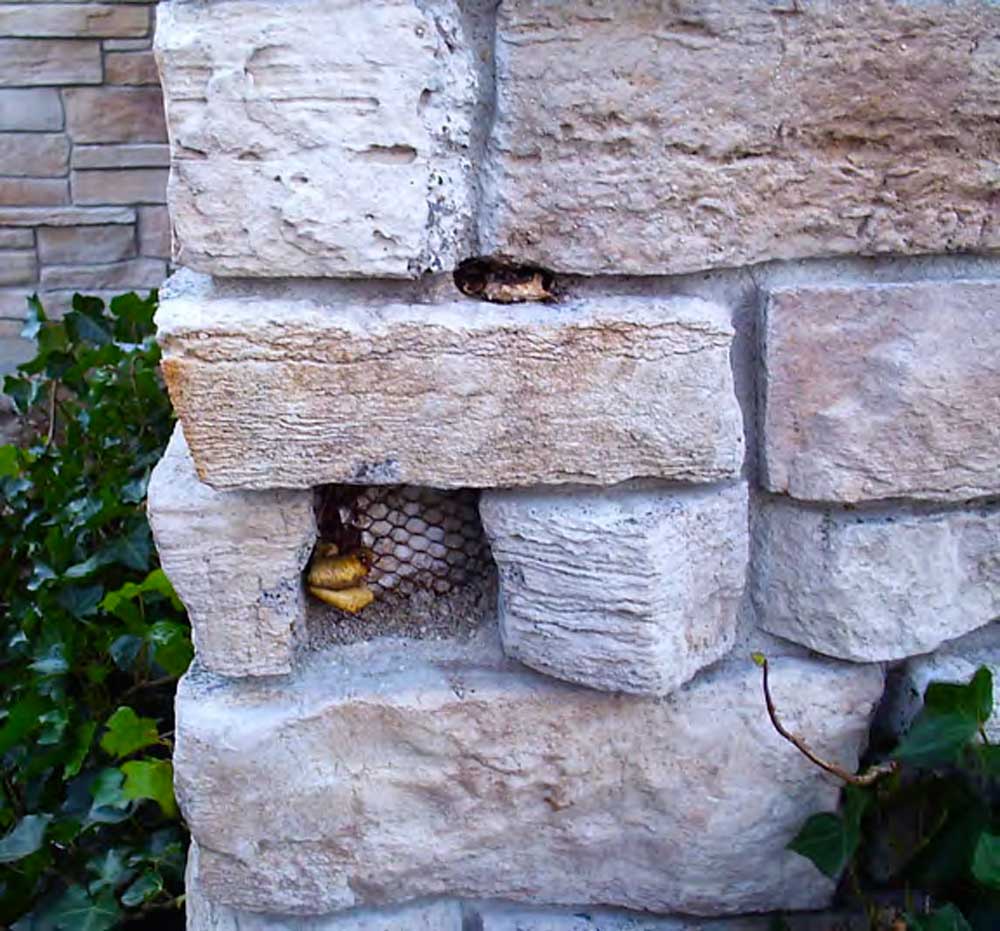 Another factor that needs to be considered when choosing a moisture management system is: “If it was to fail or if it was in the process of failing, when will it show? The real problem with some moisture management systems is that they can be in a failure mode for a long time, sometimes even for years, before the failure becomes outwardly apparent. In many cases the complete structure is in failure mode by the time it shows up as a cosmetic surface blemish. This has been the case with some major failures of the two coat stucco systems. The building owners started to notice discoloration on interior sheetrock or plaster or discoloration on exterior veneers. When the walls were opened up, the damage was so extensive the building could not be saved so they were condemned and demolished. The news reports have focused on stucco systems, but these types of catastrophic failure can, and do, occur in other veneer systems such as thin and full stone, thin and full brick and many other siding systems.

A real life example of this occurred in a home on Lake Michigan. A homeowner was doing some yard work around his 4 ½ year-old, 4 million dollar, full stone veneer house when he happened to notice a toad stool mushroom protruding from the surface of the stone around the chimney. When the wall was opened, the exterior building envelope forensic experts concluded the home was beyond repair! Unfortunately, this scenario is all too common. The surface blemish, either on the interior or exterior, that initially looks like a very minor problem is, in reality, a moisture management failure that has been in progress for a long period of time. And what at first looked like a cosmetic surface issue, is really an extensive and expensive structural failure problem. A very expensive home, with a high-quality full stone veneer, is jeopardized by a low cost or non-existent exterior building envelope moisture management system. Gee, who would ever have seen that coming? 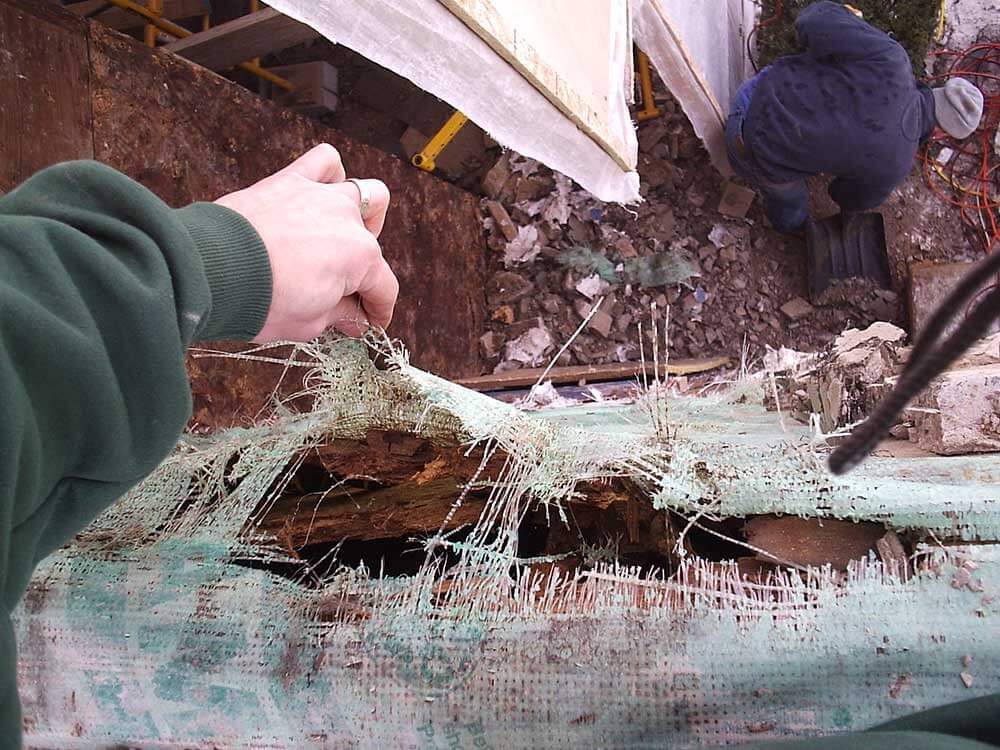 The terms material compatibility and holistic building are not just hot button topics. The selection of compatible building materials is critically important in sustainable building. The structural failure in the building envelope of the $4 million dollar Lake Michigan home was the result of incompatible building materials and a lack of holistic design and planning. A full stone veneer rainscreen is not a barrier system; therefore, the moisture that egressed through the full stone veneer was trapped behind the stone veneer and at the face of the weather resistant barrier (WRB). The moisture was trapped there for extended periods of time, allowing some of it to be absorbed into and through the WRB. Some of this moisture continued moving inward into and through the sheathing, reaching as far as the rim joists and rim joist plates. This trapped moisture spread like a cancer through the building envelope resulting in such devastation that the demolition contractor was able to scoop out ruined sheathing, studs and rim joists with his bare hands!

As bad as this sounds, it is not an uncommon entrapped moisture scenario. The IBC, Section 1403.2 “Weather Protection” states that there must be a method to drain water from the wall assembly. The IRC, Section 703.1.1 “Water Resistance” states that the wall assembly (building envelope) must include a method to drain any accumulated water. In other words if the rainscreen of the exterior building envelope is not a barrier system, the design of the exterior building envelope must provide a passageway for moisture that enters the system to efficiently drain back out of the system. An effective drainage plane system with a good weep system is needed. (B)

It is an unfortunate reality that the construction industry seems to need to be sued into compliance. The masonry industry receives many calls each year from legal firms inquiring about the availability of rainscreen drainage plane technology to the construction industry. The logical conclusion that can be reached from these inquiries is that someone is about to be sued for failing to include a rainscreen drainage system in the exterior building envelope resulting in structural failure from entrapped moisture. Construction professionals can, under limited circumstance, plead ignorance, but at a certain point, they will be held accountable.

Over the last 30-40 years the construction industry has experienced increased entrapped moisture problems in the exterior building envelope. These recurring moisture management problems have increased for a number of reasons: a less-skilled labor force, many new materials that often went unchecked for compatibility with other materials, deviations from standard construction practices (and in some cases, from code), and the lack of coordination between all parties involved in the construction project. The good news is that there are now ways to solve these issues both for financial gain and for the betterment of the construction industry, and a well-designed rainscreen drainage system is at the top of that list.

Rainscreen drainage planes that are properly designed and installed in conjunction with the appropriate weep system and other required detail components, greatly diminish the risk of entrapped moisture in the exterior building envelope. (C) The rainscreen veneer of an exterior building envelope is the most exterior surface of a building envelope. It is the first surface that attempts to change the exterior ambient conditions to the desired interior ambient conditions. In many cases they are not barrier systems and are not designed to be barrier systems (see IBC, Section 1403.2 “Weather Protection” and IRC, Section 703.1.1 “Water Resistance”), and they do take on moisture. In most scenarios they do a number of things: 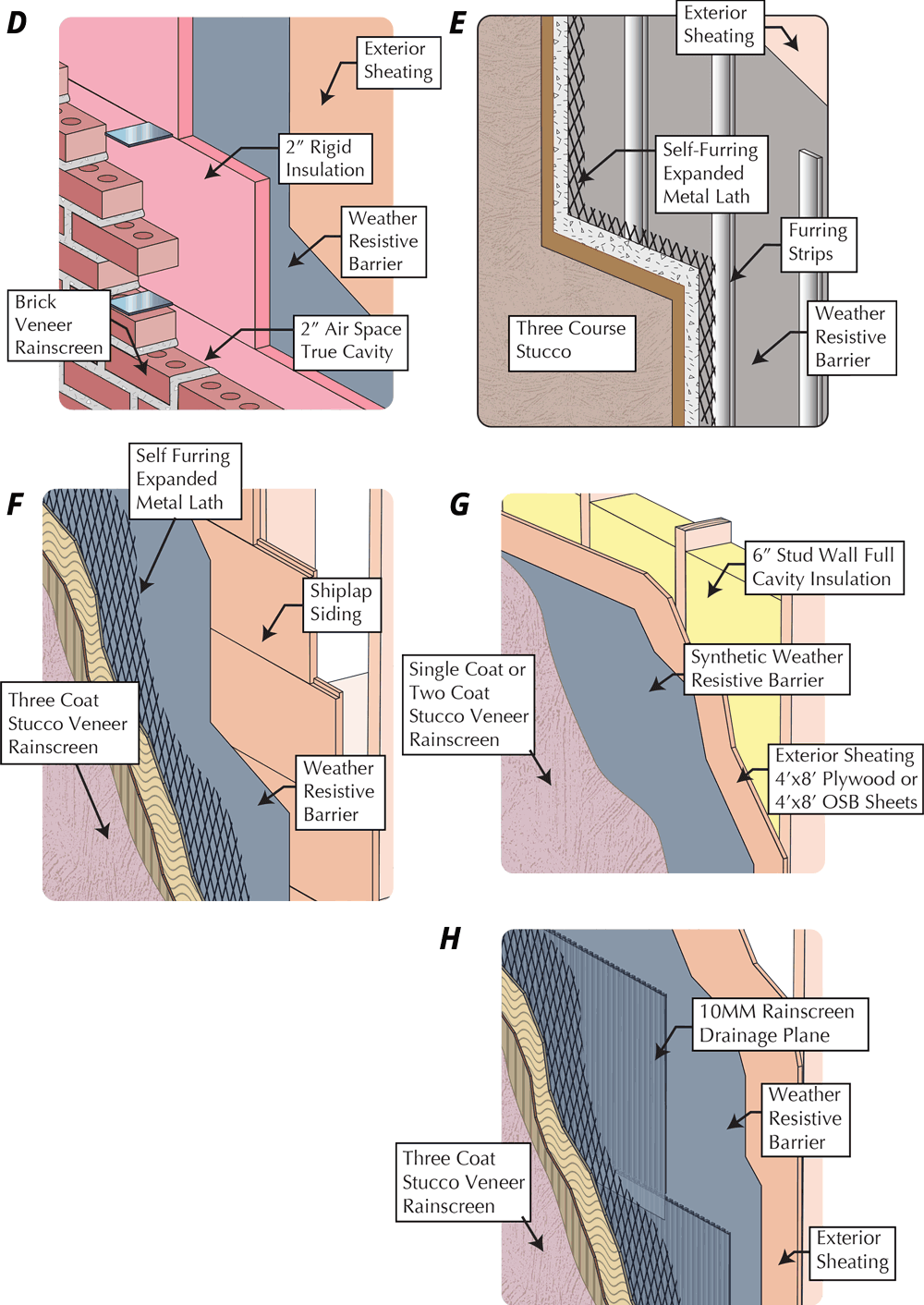 Common rainscreen veneers include stone, brick, stucco, man-made thin-stone, man-made thin-brick, thin stone, cladding and more. The layer immediately behind these rainscreen veneer materials should be a void or plane that separates the backside of the rainscreen from the other exterior building envelope components. In rainscreen walls with full brick or full stone veneers, this void/plane is commonly called a cavity. These cavities vary in width from a code compliant 1” to larger cavities of 2” to 4”. Some designs include rigid insulation installed in part of the cavity. For example the cavity will start off as a 4” void and then 2” of rigid insulation is installed in the cavity leaving a 2” air space. The 2” air space in this example (D) is the cavity.

For years stucco and other thin veneers (thin stone, thin brick, etc.) relied heavily on the use of lath to create a separation/void. In many cases this system consisted of 1” x 2” strips of wood nailed vertically onto the exterior sheathing and over the weather-resistant barrier (WRB); they were aligned with the studs. (E) This was an expensive solution because it was so labor-intensive. Its functionality was also closely tied to the labor force installing it.

As time progressed the sheathing changed to 4’ x 8’ sheets of plywood and eventually to 4’ x 8’ sheets of OSB. The WRBs changed to various types of synthetics, and the studs changed to a 2” x 6” with a great deal of insulation. (G) Even the stucco changed with one or two coats becoming the norm; less material means less protection from moisture intrusion into the building envelope. The drainage/drying capabilities of this new configuration were generally less than satisfactory.

The rush to increase profits (or in some cases, just to maintain profits and stay competitive) had short-term gains, but long-term liabilities. There were lots of lawsuits because these systems failed. The products and systems also incurred a negative image in the construction industry. Customers suffered and so did the building industry.

In Canada these failures led to new codes that established requirements for rainscreen drainage planes (2005 National Building Code of Canada, Subsection 9.27.2.2(b), Minimum Protection from Precipitation Ingress. (H) In April 2010, Oregon began enforcing a code required rainscreen drainage plane (or gap) of at least 1/8”. (Oregon Residential Specialty Code 2008 sections R703.1 and R703.2) Many other states have pledged to enact building codes requiring rainscreen drainage and some U.S. municipalities have interpreted existing code to mean that building envelopes that don’t contain a barrier system must include rainscreen drainage.

Many large U.S. homebuilders and apartment builders have also begun to include rainscreen drainage in their projects. Unfortunately, this movement has been spurred on by extensive warranty claims and insurance losses. They are beginning to realize that the risk of entrapped moisture leading to structural failure far outweighs the cost of prevention secured by including a well-designed and installed rainscreen moisture management system (rainscreen drainage plane/mat, weeps and appropriate accessories).

There is a wealth of evidence pointing to the necessity of rainscreen building envelope moisture management systems. Records of structural failure and the resulting lawsuits and awards are easily found, and the number of countries, states and municipalities demanding their inclusion continues to grow. Any professional in the construction industry who continues to ignore their importance does so at his or her own peril. Do not be that character gazing at a moisture-related structural failure muttering those hollow words, “Who could have seen that coming?” You can’t afford it and neither can the construction industry. Be proactive and include a well designed, ICC and CCMC-R evaluated rainscreen drainage plane (with the appropriate weep system and accessories) in your next project, and say “Goodbye!” to the Ostrich Syndrome forever!