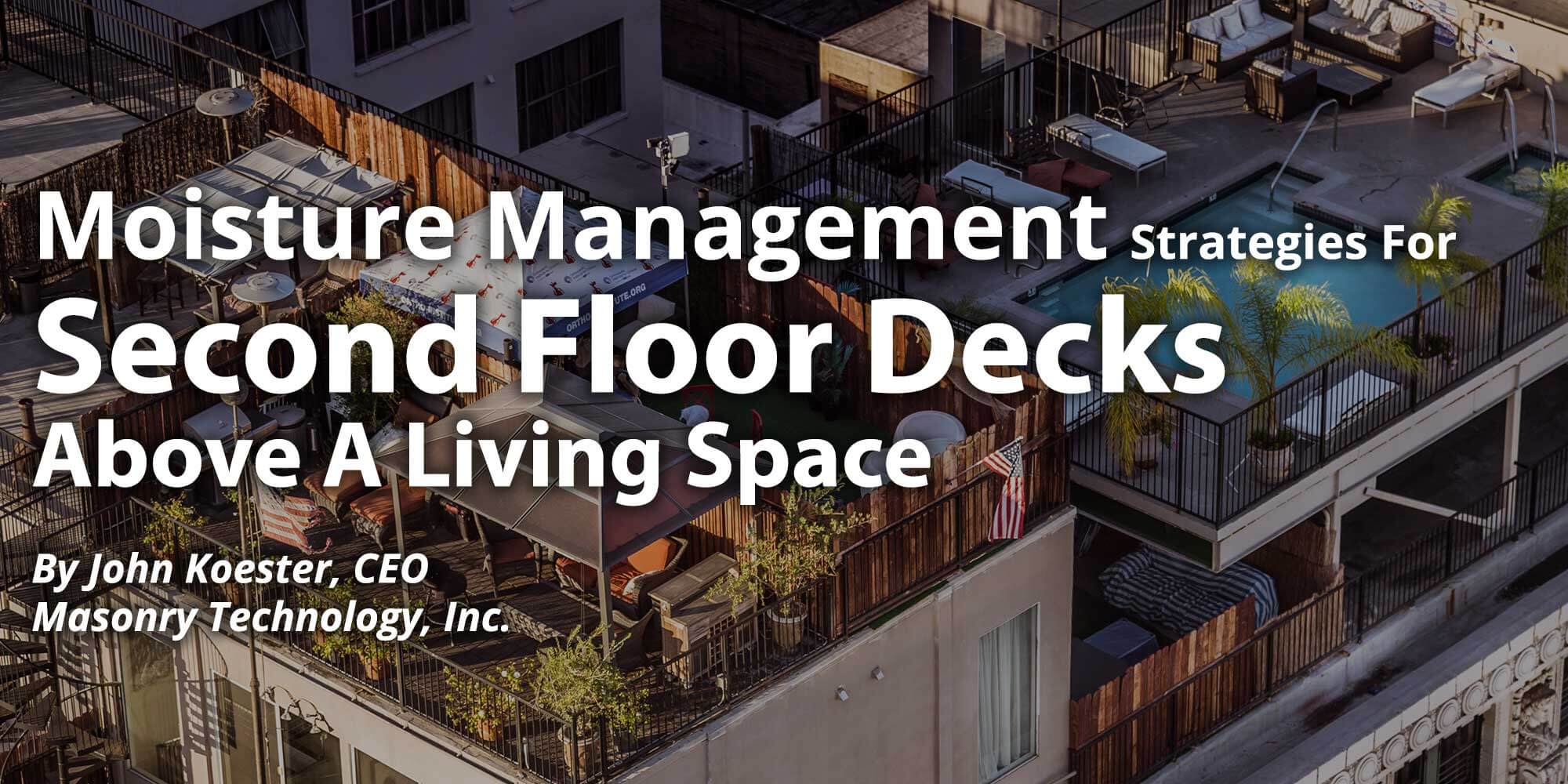 Published By: The Construction Canada | Date: May 2013 | Author: John Koester

A comprehensive moisture management plan for any construction detail must include the following:

Although these three points seem reasonable and straightforward, they are often ignored! One of the reasons may be that some professionals in the construction industry actually believe that there is such a thing as “waterproofing” and that nothing more is required. They believe this because there are hundreds of high quality moisture resistant products out there with thousands of sales people saying these products will waterproof something, anything and everything!

Informed, experienced construction professionals that understand what waterproofing systems are capable of, use the phrase moisture management system (or plan). Waterproofing is easy to say, but true waterproofing is very hard to do. The manufacturer’s warranty offers an additional point of interest. It often specifies that the warranty will be made void if there is ponding water on their system. (This is a common clause in roofing system warranties.)

How Does Good Moisture Management Apply to Verandas?

Verandas (porticos) are commonly used as second story decks. If they are used as walkways to connect exterior doorways to connected rooms they are called a gallery, promenade or loggia. The characteristics that add degrees of difficulty to these moisture management systems are that they need to be durable for traffic bearing. In many cases there is an aesthetic requirement – people want them to be pretty! A common traffic bearing overlayment that would accommodate these requirements would be stone overlayments in various patterns.

General descriptions of the construction details that make up verandas are as follows:

No Task for Amateurs

It should be apparent by now that the design and execution of the construction phase of a moisture management system on a veranda is no task for the amateur or uninformed professional. There are several factors that add even more difficulty to this type of construction.

Verandas have numerous critical construction details (previously mentioned), any of which if not properly designed, constructed and maintained, can cause serious moisture management problems. Some of the most common detail failures include:

The slope on the surface of the traffic bearing stone is the first critical point. Slope-to-drain is commonly called out in inches-per-foot or fractions of inches-per-foot. One quarter inch-per-foot (1/4” per 1’) is the very minimum slope-to-drain that is acceptable for low slope stone surfaces. The distance that liquid water has to travel before it is away from, off of and out of a construction detail is also very critical. The greater the distance, the greater the chance this flow of water will be interrupted or slowed by some sort of obstruction (organic debris, snow, ice, etc.). Distance traveled is in direct proportion to time; the amount of time that liquid water is in contact with a construction detail is in direct proportion to the amount of water it may absorb. Also, the longer water is on, in or near a construction detail, the greater the chance it may go through a freeze-thaw cycle. It should go without saying this slope-to-drain should be diverted away from the main dwelling if at all possible. (C)

A second area of focus is the top surface of the structural deck. Unfortunately, this is one of the most overlooked and neglected aspects of good moisture management of verandas.

The top surface should be sloped-to-drain a minimum of 1/4” per 1’ to at least match the minimum slope-to-drain of the traffic bearing stone; it could be sloped even more. Stone traffic bearing surfaces will rarely conform to the requirements of a barrier system. They will absorb moisture, and there will be voids/cracks in grouting mortar and bedding mortar. Moisture will ingress down to the waterproof system on the top surface of the structural deck. (C)

With inadequate slope-to-drain on the structural deck, moisture will accumulate and pond. At best it will drain slowly. Long-term, continuous moisture presence in and on this construction detail will greatly increase the risk of a leak through the waterproofing system, accelerating the deterioration of the bedding system and stone overlayment.

The perimeter detail’s requirement for liquid water to flow off the edge of the sloped-to-drain top surface of the traffic bearing stone is key and can be made more complicated by aesthetic requirements. This water may transport varying amounts of impurities (soot, dirt, organic debris, and dissolved salt and minerals from the stone overlayment system. If this water comes in contact with the vertical face of the exterior wall, it will stain the wall. Besides the negative aesthetics that may result from this contact, there is the potential for structural deterioration of the vertical wall. Inadequate perimeter drainage detailing is the most common design flaw. The design and construction of these details conflict with the aesthetic appeal of the rooflines and face of the supporting wall, and designers are too restrictive with them. In doing so, they can be too small and too few to be functional (Pretty, but pretty wet!).

The other most common detailing design flaw is that the required elevation stepdowns are not designed in the traffic bearing surface perimeters so the perimeter drainage detail material actually dams up a certain amount of water as it attempts to enter the detail. This very point can also be a material transition, material stress point. A material stress point and dammed up water reservoir + time = a water leak! A perimeter roof leak, more so than an in-the-plane roof leak, will probably become a wall leak too. (F-1, F-2, F-3, F-4)

The perimeter drainage detail that allows the water that is on the waterproofed surface of the structural deck and in the bedding mortar of the stone overlayment system to drain is also critical. Good waterproofing practices require additional, stronger materials at points where the surface of structural details change (horizontal to vertical at the edge of structural deck). If this “making stronger” means adding layers of material, this elevation change created by thicker material has to be designed into the perimeter elevations of the structural deck. The design and execution of this construction detail will, in most cases, involve some type of skirt board or fascia board. (G-1, G-2, G-3)

Improper or inadequate railing mounts are another common failure point. The structural people have done all their work to perfection; the waterproofing people have done all their work to perfection; the stonemason has done all his work to perfection and then the railing guy comes along and drills a hole (holes) through everything! Past studies have shown that 85% of all labor procedures conducted on waterproofing systems, including the installation of the waterproof system, are conducted by persons that do not understand waterproofing and are very seldom held responsible for their premature failures (e.g. electricians, plumbers, heating & air conditioners, railing installers, masons, sign installers, decoration installers, window cleaners, etc.) (H) 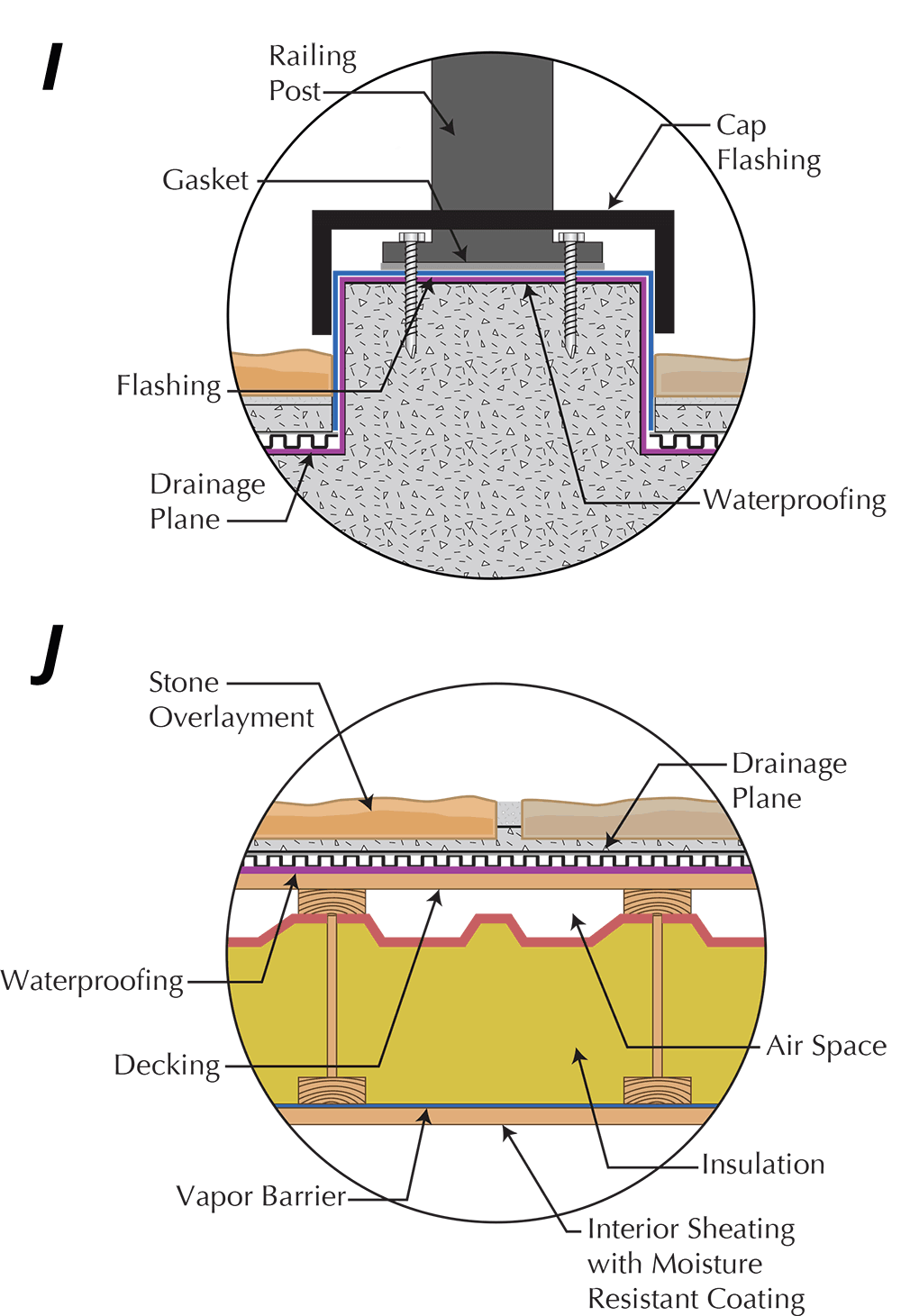 The insulation part is easy; the keeping it dry is not. The two main sources of moisture are infiltration of liquid water (a leak) and water vapor that is driven into the insulation from the interior living area where it meets a dew point and condenses into water droplets (liquid water). The types of materials used to construct the structural deck of a veranda are as numerous as the methods of how to best insulate them. There are, however, several best practice design points: (J)

(There are many examples of structural decks that will not accept all of these systems such as poured concrete, solid concrete plank, etc.)

Decks above living areas (verandas) need to be designed and built with great care. In many areas they are becoming more common because of local zoning requirements (restrictions on hard surface landscaping that affect surface water runoff). They can be a design requirement; they can be beneficial; they can be very functional and they can last a long time (with proper maintenance) if they are designed and built correctly!